Bill and Susan Cutler have been integral parts of their communities in Council Bluffs (where they were both raised) and Omaha for decades. 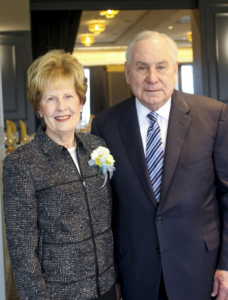 “Few people know of their generosity. One of things they do is quietly provide gifts for people and nonprofits, but always with humility,” said Fr. Don Shane who has known Bill and Susan for more than 25 years, and worked with Bill preparing funeral services for local families.

Still, both Bill and Susan have been honored and noticed for their great contributions over the years. Bill is CEO and chairman of Heafey Hoffman Dworak and Cutler Mortuaries in Omaha, NE and Cutler O’Neill Meyer Woodring Funeral Home in Council Bluffs, IA as well as the Walnut Hill, Cedar Lawn, Memorial Park and Ridgewood Cemeteries in Council Bluffs. He was inducted into the Omaha Business Hall of Fame in 2015.

Susan Cutler (formerly Susan Eakin) was born and raised in Council Bluffs. She is a 1966 graduate of Abraham Lincoln High School where she met Bill. Susan graduated in 1970 from the University of Nebraska Lincoln. Following graduation, she taught 3rd grade at Hoover Elementary in Council Bluffs until her daughter Jeanie was born.

They have been married for 52 years and have three children and seven grandchildren. They made the big move from Council Bluffs to Omaha in 1987. 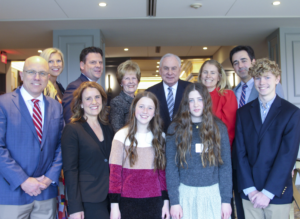 The children remember their parents as being hard workers throughout their lives.

“My dad was put on this earth to be a funeral director,” said Bill Cutler IV. “When he was growing up in Council Bluffs, his school was a block away from our funeral home. When he walked to and from school he wanted to stop there, but his father wouldn’t allow it.” 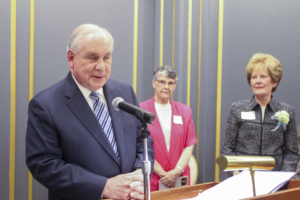 “My dad always allowed me to be there when I was little and then I was able to start working there on a serious level at 16,” Bill IV continued. “Having that opportunity at a young age taught me a lot about life and compassion and caring for others. I appreciate that my parents allowed me to experience that growing up.”

All of his children have helped out at the home over the years, making this a true family ministry of compassion. And while Bill was a role model at work, he said he hoped his children looked to their mother and followed her example.

“She is a great example of faithful giving, and a role model of doing the right thing,” Bill said.

Susan said her style of parenting wasn’t to order her children to be a part of their community, but to show them what joy it brings. “Watching my parents growing up, they were great leaders in their church and their community, so children and grandchildren learn by watching examples,” she said.

“I was always inspired by my dad’s understated optimism. Couple that with my mom’s faith and trust in God that you always are where you are meant to be, she taught us to walk by faith and not by sight,” said Jackie Conway.

“My parents have always been givers and do things for others,” said their daughter Jeanie Jones. “My father serves others every single day through his work and my mother serves the community through her volunteerism and philanthropic work. My parents are givers beyond measure and that has inspired me to serve my community as well.”

While Susan and Bill have both volunteered, given back, and served others for decades, neither has slowed down in recent years.

Bill currently serves on the Archbishop’s Development Committee and is a member of the Knights and Ladies of the Holy Sepulchre. He served as the Board President of the Nebraska Organ Retrieval. He has served on boards across Omaha and Council Bluffs including the Physicians Mutual Insurance Company, Westside Foundation, College of Saint Mary, Mercy Housing, Merrymakers, and Catholic Charities.

Susan also has an impressive list of service across Omaha and Council Bluffs. She served on several boards that provide educational opportunities for children and on performing arts guilds across our community, creating a more culturally-rich and healthy Omaha Metro area.

She currently serves on the board of directors for the Methodist Hospital Foundation, University of Nebraska Medical Center Healing Arts Advisory Committee, and the Archbishop’s Committee for Development. She is a member of the Equestrian Order of the Holy Sepulchre of Jerusalem Northern Lieutenancy.

“I have had the personal experience of watching Bill help many, many families without drawing attention to it,” said Fr. Shane. “Families face tragedies, and he is able to be an important part of helping them get through a really tough time. I see him as such an honorable and professional person.”

As many people who know them would say, Fr. Shane said it best, “My life is better having Bill and his family as friends.”