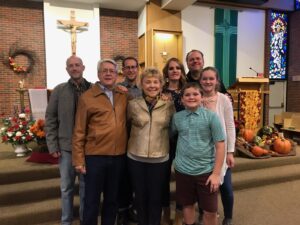 The Notre Dame Sisters are happy to announce Dick and Julie Bea Pierson (Wolff) as our Mother Qualberta Service Award recipients this year. In honor of their American Foundress, the Notre Dame Sisters established an award in her name. Each year the Sisters nominate a person or group who possesses the following qualities: witness to faith in God and love for people, service to others, a pioneering spirit, partnership with the Notre Dame Sisters and excellence in teaching others.

“Both Dick and Julie Bea Pierson are an incredible example of citizens, parishioners, parents, you name it,” said Sr. Margaret Hickey, Provincial President for the Notre Dame Sisters. 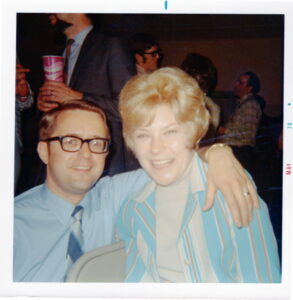 Dick and Julie Bea Pierson are receiving this award for their 50+ years of actively supporting their community together. From their active role in St. John’s parish in Valley, to sponsoring students on the Winnebego Reservation, or Micah House in Dick’s hometown of Council Bluffs, to the Omaha Community Foundation, and so much more, the Piersons have touched so many parts of the Omaha Metro.

“These are two people that won’t toot their own horn, so on behalf of the St. John’s community, we want to congratulate them on receiving this service award, which is well deserved,” said Fr. Lloyd Gnirk, Pastor of St. John’s parish.

Both Dick and Julie Bea will tell you how proud they are of their three sons: Greg, Eric, Matt, and their daughter in-law: Katy, and of course their grandchildren: Nora and Luke.

“They clearly love and trust each other. Seeing the challenges they faced in business, with family, with friends, and they figured out how to stay together and make a good life for themselves and their kids is inspiring,” said Matt Pierson, their son.

Dick spent the majority of his career in the trucking industry at Beeline Motor Freight where he eventually became owner. Retired from trucking companies he founded in 1988, Eagle Enterprises and Eagle Logistics, Dick now spends his time serving his parish community, restoring classic cars, and spending time with his three sons and two grandchildren. Control and ownership of Eagle Enterprises was taken over by Matt Pierson, and Eagle Logistics was taken over by Eric Pierson. 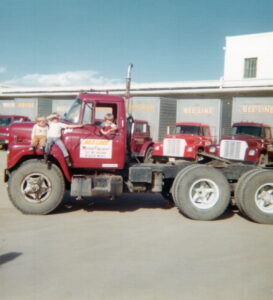 “I hope I taught my boys by example to be honest, be respectful of people in their respective industries, and to give back when and where you can,” Dick Pierson said.

Julie Bea Pierson grew up knowing the Notre Dame Sisters, as she was distantly related to more than one Sister, and attended Holy Name in Omaha. It’s no surprise, then, that Julie reached out when she needed a babysitter for her three boys, and developed a lifelong relationship with Sr. Loretta, who stayed with the boys when Dick and Julie Bea went out of town and made kolaches with them.

“She found a unique way for her boys to have a close relationship with the Notre Dame Sisters growing up, just like she did,” Sr. Margaret said.

Through their lives, God has been at the center. Dick will tell you that his religious upbringing took him to tent revivals and several Christian denominations. Julie Bea, raised Catholic, also had a strong relationship with God. When they were engaged, it became clear they wanted to share a singular religion. 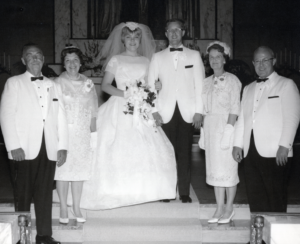 “He taught me about Christianity and I taught him about Catholicism. Being a convert has been a real advantage,” Julie Bea said. “I remember him saying, ‘There are many things we are going to fight about in this marriage but religion will not be one of them,’ And we have never fought about religion, ever.”

There will be more information about the Piersons and the award at the Celebration of Spirit virtual event including an article about their family and a video tribute. Click here to follow the Notre Dame Sisters on Facebook to get alerts about the event.