Watch their video below:

We were grateful for all of the Cutler family attending the dinner.

You can read the article about the Cutlers here.

About Mother Qualberta & the Service Award 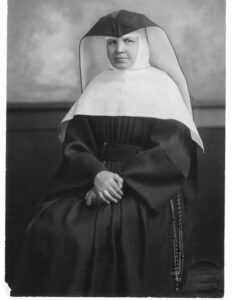 In 1910, Sister Mary Qualberta brought four sisters from Czechoslovakia to serve Czech immigrants and to establish the Notre Dame Sisters in the United States.

Their beginning was difficult due to the hardships of the new language and customs, different climate, and a lack of food and means of income. Sister Qualberta encouraged her sisters to persevere.

They began their ministry at the Hessoun Orphanage in Fenton, Mo., near St. Louis. A year later, more Sisters arrived from Czechoslovakia and Sr. Qualberta was appointed Reverend Mother. She soon had Sisters teaching in schools in Nebraska and Iowa. In 1917 Mother Qualberta sent two Sisters to Omaha to work with Father Edward Flanagan at his first Boys’ Home. In 1920 Omaha became the Provincial Headquarters for the Sisters.

After serving as Superior for 19 years, Mother Qualberta stepped down from her position. Even in her retirement, she continued to write letters of encouragement to the Sisters and develop educational instruments for teachers to use in classrooms.

In honor of their American Foundress, the Notre Dame Sisters established an award in her name. Each year the Sisters nominate a person or group who possesses the following qualities: witness to faith in God and love for people, service to others, a pioneering spirit, partnership with the Notre Dame Sisters, and excellence in teaching others.

Notre Dame Sisters of the