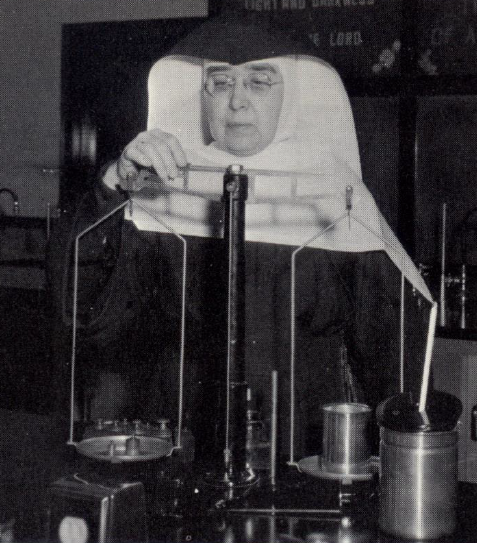 The decades of the 1960s was noted for the conflicts in the world. Besides the War in Vietnam in which American military forces were involved, there was the 6-Day War of Israel versus Syria, Egypt and Jordon. The Cold War between the Union of Soviet Socialist Republics (USSR) and the United States presented a direct and dangerous confrontation. Consequently, President John F. Kennedy, shortly after taking office, advised Americans to build shelters to protect their families against atomic fallout in the event of a nuclear exchange with the Soviet Union.

A response to the Cuban Missile Crisis

The U.S. Civil Defense Program would provide protection for every American. While Americans accepted the president’s order, the Notre Dame Sisters began the process of establishing a shelter in their building.

Mother M. Loyola Samek, the president of the community, applied for two Fallout Shelter Licenses or Privileges for Notre Dame Convent and Notre Dame Academy. Both were accepted by the Director of Civil Defense William P. Durkee on December 21, 1965.

Mother Loyola was appointed manager of the shelter at the convent, and Sr. Magdalen Rozmajzl as deputy of operations. The Notre Dame Convent shelter, located on the basement floor and in the basement area under the kitchen, would have in stock food for 100 spaces, 12 water drums, 2 drums for Sewage Disposal, 2 Sanitation kits, 2 Medical Kits A (for 50-65 persons) and one RADEF (acronym for Radiology Defense kit). This shelter was 81 cubic feet in area.

The Academy Shelter had a capacity for 620 in the 881 cubic feet area of the lower level of the academy. Sr. Eleanor Kramolisch, teacher at the Academy, was the shelter manager, and Sr. Magdalen, the RADEF monitor. This Shelter had food for 621 spaces, 112 water drums, 13 Sanitation kits, no sewage disposable drums, 2 Medical Kits for 300-325 persons, and 1 RADEF kit.

As RADEF monitor, Sr. Magdalen was well qualified. Among her many college courses were listed general and advanced physics, nuclear physics, inorganic and organic chemistry, nuclear chemistry and instrumentation. Through the extension division of the University of Nebraska, Sister completed courses in Radiological Monitoring for Instructors, Civil Defense Shelter Management, and Emergency Operations Simulation Training. After completing the Radiological Monitoring Instrument Operator’s Course, Sister applied for the privilege to teach the Civil Defense Adult Education Course, Radiological Monitoring. In June 1967, Sister was approved by the Nebraska Civil Defense Agency as Radiation Protection Officer with the right to use the CD V-778 Radiation Training Source Set.

Sister Magdalen, who had completed her 50th year as a teacher and 25th at Notre Dame Academy, added Civil Defense instruction to her activities in July of 1967. She enrolled two classes of Notre Dame Sisters who were teachers in lowa, Kansas, South Dakota and Nebraska. Using her own science lab at the Academy as a training center, she taught thirty-five Sisters who completed their RAMONT (Radiological Monitor Training Course) training by August 2, 1967 when they were presented with certifications as RADEF Monitors by Wm. Dean Noyes, Omaha/Douglas County Civil Defense Coordinator.

It should be noted that Notre Dame Academy was one of three Catholic organizations where lab space and science personnel provided the training. The other two were Sr. Anna Marie of Mercy High and Sr. Mary Mechtilde of the College of St. Mary.

Sr. Magdalen offered classes for parents and friends of Notre Dame Academy. The first, held in January 1968, included seventeen individuals from the Florence area. Another class of fourteen was taught in April of that year. These individuals in the event of a nuclear disaster would be able to predict and evaluate the early effects of nuclear detonations, and would, after the immediate dangers of radiation had subsided, initiate and direct extensive decontamination operations so as to return the community to normalcy. Fortunately for all concerned, there was no nuclear disaster that called for the services of the RAMONT personnel.

Information obtained from the personal file of Sr. Magdalen Rozmajzl.