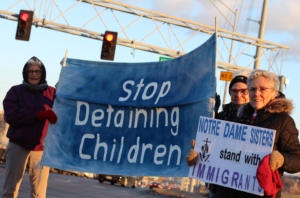 Mothers and Others is a group of spiritually based activists in Omaha, Nebraska. I have worked with them since 2019 with the mission to:

At the same time, here in Omaha outraged individuals and groups wanted to join and support this protest. Two local volunteers (Sr. Kathleen Erickson, RSM, and Rev. Carol Windum) travelled to DC to join the protest.

Upon their return, outrage and horror increased among some Omahans as they learned more first-hand details. Informal discussions ensued identifying the local dearth of awareness and attention of the immigration issues. The question:  What could be done here in Omaha? How about an awakening through awareness?

A loosely-formed group of some 15-20 people from across the metro area organized a committee to increase awareness by peaceful protest. 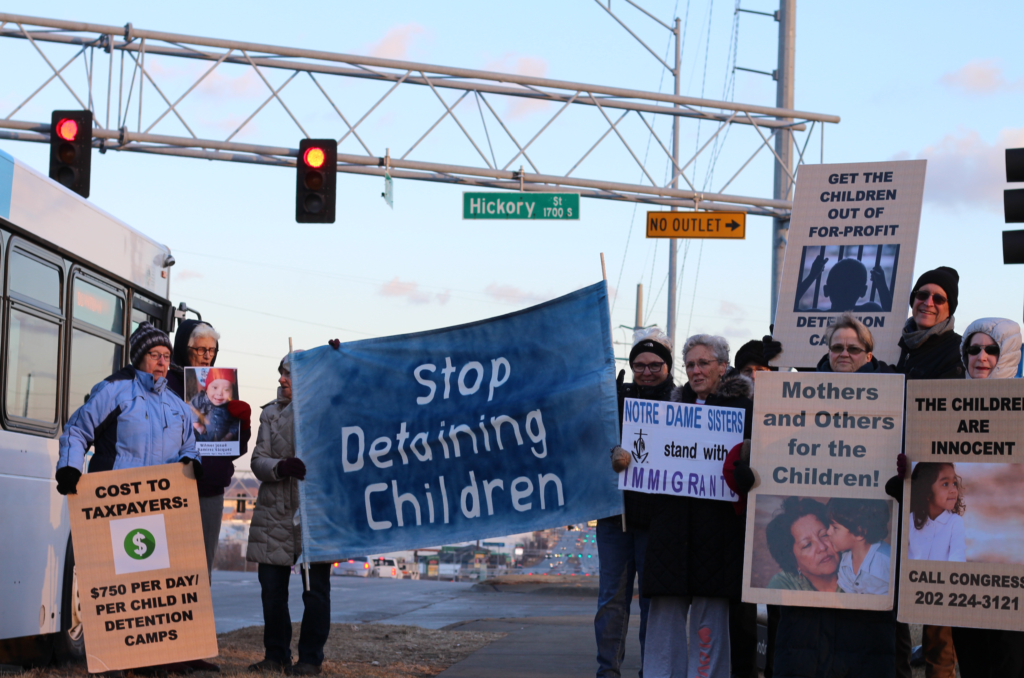 Concretely, a heavily trafficked corner (72nd and Hickory) was the chosen spot to gather with posters, banners, and signs to witness every Thursday morning from 8-9 am –an open invitation.  Over the summer months the groups fluctuated in numbers but sustained a deep commitment. This grass roots growth evolved which led a core group to form an open committee to continue discussion, support, and expansion.  An initial step was sending Christmas cards to each pastor of every Catholic parish with information inserts for bulletins along with suggestion of homilies addressing the present immigration situation with the story of Mary and Joseph fleeing as immigrants. Prayer cards with the picture of a child who died at the border were included in the greeting cards.

At this point, the group needed to name themselves:

Mothers & Others Justice and Mercy for Immigrants

They set their mission and began on actions, collaborating with other groups and beginning to take donations.

We began circulating flyers, letters, writing articles, and traveling to make our voices heard across the Omaha Metro and beyond. You can see articles published on our Facebook page here.

Our actions widened during the COVID-19 pandemic, hearing about what local immigrants were facing at work in light of a pandemic. Mothers and Others collaborated with Ixim (pronouced Isheem), a local group producing handmade face masks for jailed detainees and workers in meat packing workers.  A seven “car-a-van” delivered these to an immigration group in Grand Island.

We then welcomed and hosted the overnight stop in Omaha of the National TPS (Temporary Protective Service) bus tour to DC. You can read more about this powerful display of solidarity here.

We organized a Memorial Day witness/prayer in Memorial Park on the separation of children and death of refugees. A Prayer Vigil on International Refugee Day (designated by the Pope) was held on the grounds of the College of St Mary’s, amid social distancing, with witness talks, songs and a powerful poem of “Home.” We attended rallies and protests to support the Black Lives Matter Movement.

We have ongoing collaboration /communication with:

Actions: how can you be a part of Mother and Others?

WE ARE ALL IN THIS TOGETHER.