By Molly Mullen, Communications Director for the Notre Dame Sisters

In April 2020, Sr. Barbara Markey sat down for what was supposed to be a series of interviews on her extensive accomplishments. We first discussed her interest in becoming a nun and a teacher. Due to COVID-19, we were unable to ever schedule another interview. Below is an article about her early life as a Notre Dame Sister.

Sr. Barbara Markey, ND, passed away peacefully Holy Saturday with lifelong friend Sr. Dorothy Rolf, ND, by her side.  We celebrate her memory! 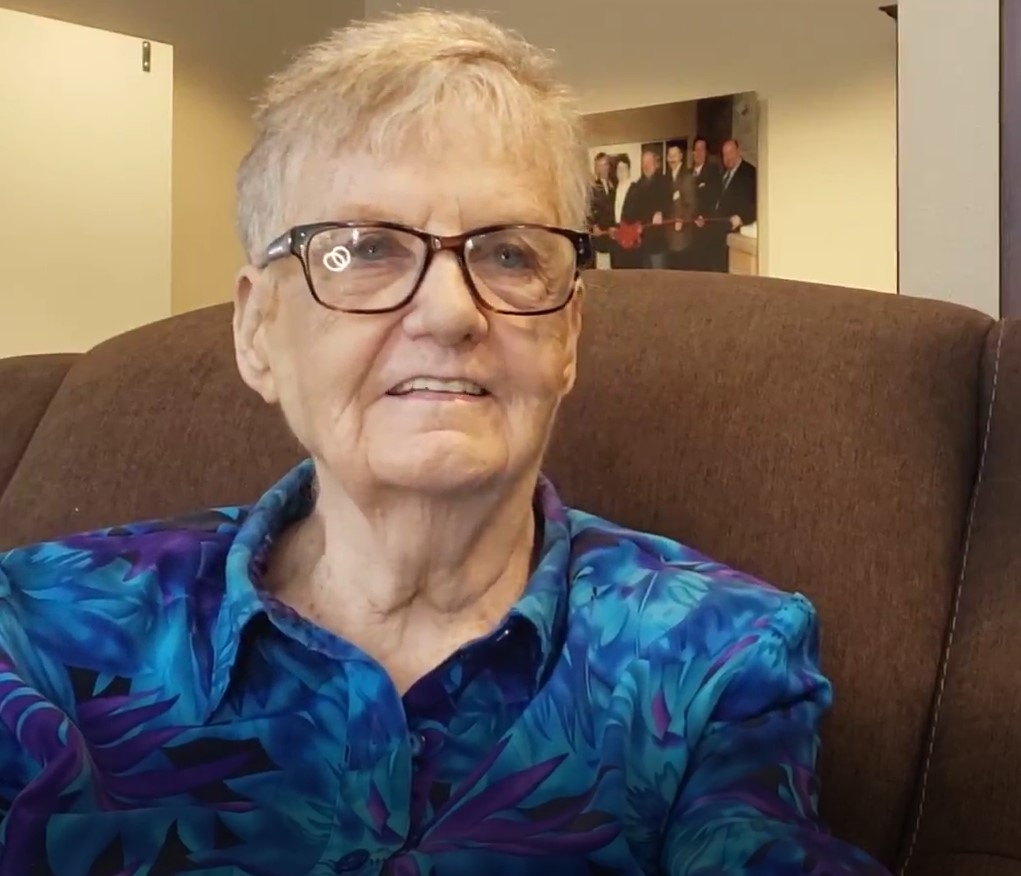 She planned from a young age to be a reporter, recalling seeing the Denver Post for sale while riding the streetcar as a child.

However, over many years and decades Sr. Barbara Markey served as an elementary and secondary school teacher.  In the Omaha Archdiocese this included St. Adalbert and Notre Dame Academy.  She also taught at Holy Trinity in Brainard, NE, St. Michael’s in Harlan, IA; and Wahoo Catholic High. 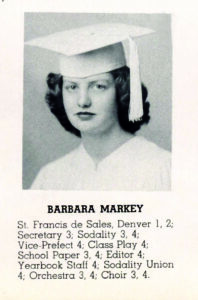 It all started when Sr. Markey followed in her sister Mary’s footsteps and came to Omaha, Nebraska, for boarding school at Notre Dame Academy, where she graduated in 1952.

“I was here (NDA) in my junior year of high school that it first struck me that I might want to join the Notre Dame Sisters. My sister Mary was a year ahead of me. I went to her to tell her my intentions and she said, ‘But, Barbara they never smile.’ And I said, ‘Oh, yes they do!’ because I knew sisters like Carmelita and others who made me smile and told me that I could do this.”

So, with no intention younger in life to be an educator or a nun, she joined an order of Catholic educating sisters. Some of her fondest memories came early because she was so inquisitive and her novice director encouraged questions. She remembered her group of Postulants asking all kinds of questions when they joined — and nothing was off limits! She even cherished the early challenges she faced.

“Some of the people that came in with us left and I think that was good for them and it was good for us to see them go and say, ‘Now I could go too… Do I want to do that?’ I liked that because every time someone left, we all had to examine all over again why we were doing this… like a re-commitment.” 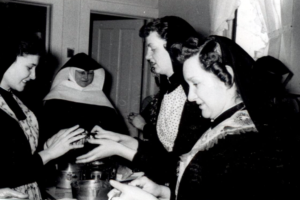 She said everybody in religious life questions at a different time. “I remember being in my little cubicle at night as a novice and having that conversation with myself, ‘You know you don’t have to be here, Barbara… your family is accepting of whatever you decide…’ so it was always my choice to be here.”

“You felt like you were a part of something,” Sr. Barbara Markey continued. “My sister Elizabeth joined a very large community of sisters and she loved them and it was the right place for her but I love being a Notre Dame because everybody in this community knows everybody and we are all together in whatever it is we’re doing.”

Many of Sr. Barbara’s early years of teaching also included holding positions for the Notre Dame Sisters.  She served as Vocation Director, Postulant and Novice Director, and also as a member of the Sisters’ Leadership teams for five terms. She attended many international meetings of the Notre Dame Sisters, especially in the renewal years after Vatican II.  She headed many key committees, assisting the Sisters in their renewal and outreach to meet various needs in the Midwest.

“I thank God for Barbara’s role in my life as mentor and teacher,” said Sr. Joy Connealy, ND. “She was our novice director and walked with us as we were formed as Notre Dame Sisters. We had many opportunities to learn and grow with Sr. Barbara – She called us to not only learn what it meant to be a Notre Dame Sister, but to celebrate it. Sr. Barbara Markey celebrated her call as a woman religious and she often reminded us that no matter what lifestyle you had chosen, you needed to choose it over and over.  She modeled that on-going discernment and fidelity for us.” 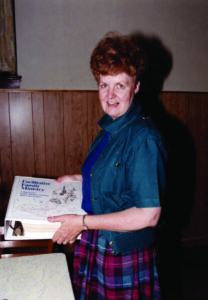 Sr. Barbara Markey was more than a teacher; she was a daughter, sister, aunt, and great aunt, a vowed woman religious, friend, mentor, counselor, and colleague. She was an author, leader, renowned expert on family life and marriage, a woman of deep faith and so much more.

In 1978 she was appointed by Archbishop Daniel E. Sheehan to be the Director of the Omaha Archdiocesan Family Life Office where she collaborated with others to create the FOCCUS marriage preparation manual and REFOCCUS for training parish family ministers.

To promote the tools she had helped create, Sr. Barbara traveled to various states and nations providing lectures and workshops for Family Life ministers.   She also served on USCCB’s Marriage and Family Committee. She had close ties to Creighton University over the years serving at the Life-long Learning Center as teacher, counselor and marriage and family counselor.  In 2008 she began service as Pastoral Associate and consultant for Campus Ministry at St. John’s, Creighton campus.

“We believe that God leads us and we pray all the time that we will meet the needs of the times. We continue to do that quietly as a group, and we accomplish many things together through God,” Sr. Barbara Markey said.