We were honored this year to receive letters from almost all of our Notre Dame Sisters about their Christmas traditions growing up. Below is the first post about Christmas traditions. Hopefully, this can inform how your traditions may change this year, as COVID-19 keeps us from celebrating the way we usually do. Below, read traditions and see the full, hand-written stories at the bottom. 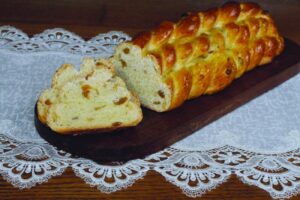 Mom would begin Christmas baking two months in advance. Partially because some “treats” required “ageing”. There was the fruitcake made with many dried fruits and nuts, yet “laced” with whiskey every couple of days!

There were also many cookies – some special for Christmas – almond crescents, cathedral windows, peanut butter kisses, to name a few. Homemade candies were special also. There was fudge, peanut clusters, peanut butter balls, coconut balls, chocolate covered cherries, and peanut butter. Dad ad I would make the peanut butter as it does take two people to make it.

Christmas Eve day was reserved for baking. Mom would make houcke rolls, kolaches, apple strudel, and rosette (a Czech cookie). Our Christmas Eve noon meal was soup with freshly baked rolls as the feast was the evening meal.

A special tradition in our family was decorating the Christmas tree. It began precisely two weeks before Christmas. That was because Dec.11 was Mom’s birthday and that was how she wanted to celebrate it. So after the evening meal, the tree was brought into the living room and the boxes of lights and decorations too.

From the youngest to the oldest we were there pulling out the lights, getting the hangers on the Christmas balls, finding the star or the angel for the top. Somehow it always seemed the lights took forever. One light or another needed to be replaced so they would all light up. Then began putting the ornaments on the tree, and of course a couple would get broken but somehow the tree was always adorned with more than enough.

There was no special theme we just filled the tree with ornaments accumulated over the years. Last came the strands of tinsel. Those were to be evenly distributed on the tree. We would start out carefully placing them strand by strand. However, that became tedious and often there would be clumps of strands here and there.

After the tree was decorated, came two special ceremonies. The first one was solemnly putting the manger scene under the tree. We took turns placing the figurines around. We seemed to have the most difficulty placing the animals just right and had more than enough sheep. When all were in place, we paused and were reminded that this was the reason for the season.

The other event was putting our brother’s electric train set around the manger scene and the tree. This was one of the few times the train set came out for show. After it was all assembled, we would put out the lights in the room, turn on the tree lights, plug in the train set, and sit quietly admiring the accomplishment of the evening. The excitement subsided and we were mesmerized by the lights and the train, as we anticipated the joy and the activities of the days ahead.