Father Edward Flanagan began to care for five homeless boys in December 1917 when he opened a Dodge Street home for them. Finding someone to take a mother’s place posed a problem. Father Flanagan turned to Father John S. Broz who was the spiritual director of the Notre Dame Sisters. Father Broz wired Sister Qualberta Krivanec in Cedar Rapids, lowa of the request for two Sisters for Boys’ Home. Sister Qualberta traveled to Schuyler, Nebraska to consult with her assistant Sr. Symphorosa Neuner, who became very enthusiastic about the offer. Later, another assistant, Sr. Gustava Melmer also gave her consent. 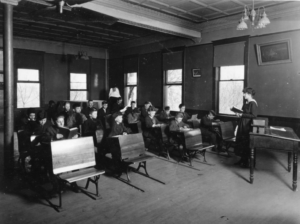 Despite the lack of Sisters, two were sent to Boys’ Home on December 11, 1917: Sister Rose Slevin who spoke only English, and Sister Martha Djobek who spoke only Slovak. They made up for the language problem through their loving care of the boys. Ludmila Kucera, an aspirant, was the third member of the group assigned to Boys’ Home.

As the Dodge Street Home became too small for the increasing number of boys, Father Flanagan acquired the German Home on South 13th Street. Then, on September 10, 1919, Father purchased Seven Oaks Farm in Florence. However, he sold it to the Notre Dame Sisters in 1920 when he deemed the property was not conducive to his expansion plans. He purchased Overlook Farm, ten miles west of Omaha, in 1921.

Moving to the new location was difficult for the Sisters, but they cheerfully worked hard amidst the suffering. There was no water in the house and no sidewalks outside; plowed earth stuck to the shoes and mud was carried throughout the building.

At first the boys went to nearby schools, but because of irregular attendance or because of misdemeanors, the Juvenile Court recommended that Father Flanagan provide a school for them. Sisters Rose and Gustava Melmer and a lay teacher taught the boys.

Boys kept coming. In 1922 alone one hundred boys were stationed at Overlook Farm. 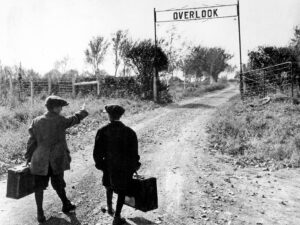 The domestic part of Boys’ Home was the charge of the Notre Dame Sisters. They were most enthusiastic about the success and comfort of the boys. Sr. Martha cooked good, wholesome and substantial food. The Sisters made certain the boys had shoes and clean clothing, repairing the old clothes or replacing them with new. Sr. Cyrilla Hudek was in charge of the washing and ironing. The Sisters supervised the sleeping quarters so they were clean and sanitary. The boys, as a result, were content, happy, and often expressed their appreciation.

The motherly concern for the boys was shown the morning little Allen complained of his stomach. As Sr. Rose stroked his hair, she asked what he would like for breakfast. He remarked he’d not be able to eat anything, “but—I wish I had an orange, some cookies, peanuts, candy….” Sr. Rose smiled; the other boys laughed, but Sister sent him some of the delicacies he requested.

When the Spanish influenza raged through Omaha, twenty boys took sick. Through the medical treatment of Dr. J. P. Dwyer and the self-sacrificing efforts of Sr. Rose, the boys recovered. Sr. Martha made sure the boys had nourishing meals.

Father Flanagan’s Boys’ Home Journal, published during the early years, had these comments:

“…dear Sister Alena, …I suppose you think that I forgot all about you, . .. I shall never forget… your motherly care for us.:” December 1918

“Sr. Rose is the angel of unceasing labors and untiring devotion to the cause of training and protecting our poor boys whom fate has thrown into her hands.” October 1919

“Many a visitor at the Home would give a nickel to one of the lads who … will run all over the house in search of Sr. Alexia to give her his easily acquired money for the flowers in the chapel.” March 1921

“Worth Winans very successfully passed the 8th grade examinations …, but wonders whether Sr. M. Emanuella, his untiring teacher, will agree with him on his “worth.” June 1921

“Our violin class now consists of twelve boys …. All of the boys enjoyed the music furnished by the violin orchestra. Credit must be given to Sr. M. Regina who has taught these young violinists.” December 1922

When the number of boys increased from ninety to 190 and the Notre Dame Congregation was unable to provide additional teachers, Mother Qualberta Krivanec suggested to Father Flanagan that he seek workers from another religious order. In a letter dated January 19, 1923, Father announced he had acquired the services of the Sisters of Mercy. The Notre Dame Sisters who dearly loved the abandoned boys and had sacrificed themselves for their good, painfully made their departure on January 24, 1923.

The following is a list of the Notre Dame Sisters who served at Boys’ Home:

Information provided from various sources in the file on Boys’ Town in the Archives of the Notre Dame Sisters. Written by archivist Sr. Anita Rolenc, ND.