Gabriel Schneider died February 14, 1867.  He was a priest, Father, Mother, founder, but most of all a SAINT. 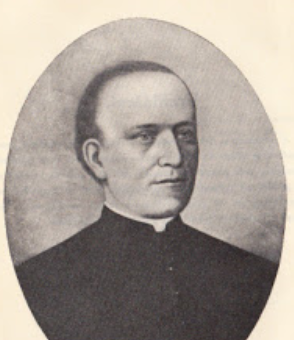 Gabriel Schneider was born in Krems, Bohemia on March 21, 1812 to Matthew Schneider and Rose nee Zimmerman. He was baptized the same day and named Gabriel. From ages 6 to 12 he attended the village school, after which he was “exchanged” for one year into a German miller’s family to learn the German language.

Too weak to physically engage in any trade, Gabriel begged to continue his philosophical studies in preparation for the priesthood at Bohemian Budweis.  On July 25, 1837 he was ordained.  His first assignment was as second assistant to the pastor at Klenci.  He organized a “living rosary” and spread devotion to his patron St. John Nepomucene.  In 1838 Rev. Schneider was transferred to Mrakov where he organized the women, girls and boys into groups for guidance.

In 1842, after a transfer to Hirschau, Father organized a Girls’ Sodality as a way to prepare girls to be well-trained women.

Father had a dream of the Blessed Mother leading girls to him. That gave him the impetus to organize a school for the education of girls. After two wealthy maids, Margaret Grall and Barbara Seidl volunteered to work for him, he began to build a parochial convent school  in Hirschau. He sent the two women to be trained by the School Sisters of St. Francis in Gratz, Stiermark.

On May 15, 1847 Margaret Grall and Barbara Seidl received the religious habit and the names Joanna Nepomucene and Magdalene, respectively. Sr. Joanna became seriously ill and died after making her profession of vows. In 1848 Sr. Magdalene Seidl and four candidates returned to Hirschau, and in October the school officially opened.

In 1849 Father petitioned the Notre Dame Sisters in Munich to take over the school. Mother Teresa Gerhardinger visited the school and suggested that it be a day school before developing into a boarding school.  She also requested that the candidates be sent to Munich for further training.

In 1851, due to the problems Mother Teresa had in negotiations with Rome over the approval of their Holy Rule, she had little time or interest to give to the mission activities of the Sisters in Hirschau. Consequently, the Bishop of Budweis counseled Father Schneider to found an independent congregation of Sisters. After intense prayer, Father Schneider traveled to the Munich Motherhouse to bring home his two novices, Sr. M. Remigia and Sr. M. Armella and the six candidates.

When attempts to acquire other religious orders to take over the school in Hirschau failed, Father Schneider realized it was the will of God to found a new congregation. He began to write the constitution for this new venture.

August 15, 1853 marked the beginning of the Congregation of the Poor School Sisters de Notre Dame, with the first profession of the two novices and the reception of the six candidates. Sr. M. Remigia was appointed superior and Sr. M. Armella s novice mistress.

In 1854, since Hirschau became too small for the growing congregation, Father bought a deserted 13-century monastery in Horazdovice. On October 29, 1854, the first reception and profession in the new General Motherhouse was held.  Six novices were professed, six candidates invested with the habit, and Sr. M. Teresa Franz was elected General Superior.

Realizing the need for further education of the Sisters, Father Gabriel established a house in Prague in 1857 which he converted into a convent and normal school, calling it St. Ann’s.

The Archbishop of Kalocsa, Hungary, wanting School Sisters for his diocese, sent five Hungarian girls to Horazdovice as candidates. When invested, they accompanied Mother Teresa and couple Notre Dame Sisters to Kalocsa. Mother Teresa was so impressed with the huge, completely equipped building at the disposal of the Sisters, that she tried to persuade Father Schneider to make the General Motherhouse in Hungary.  When Father refused, she completely broke away from the Congregation.

Bishop Valerian Jirsik appointed Father Gabriel as Superior General until 1864 when a General Chapter could be held canonically for the election of a Superior General.  The twelve members elected Sr. M. Jane Nepomucene who had been vested with the habit in Hirschau in 1853.

Father Gabriel moved to Ann’s in Prague where he worked to make St. Ann’s College an accredited school.

All of Father Schneider’s activities during his life were accompanied by chronic physical ailments.  Despite many troubles, heavy debts, illnesses of the Sisters, dowries promised and not paid, and other problems, Rev. Gabriel remained amiable and solicitous for the welfare of the congregation. He became seriously ill in December 1866, but lingered on, suffering more each day, until his death at an early hour on February 14, 1867.  He passed to an eternal reward as a priest, a Father, a Mother, a founder, but most of all a SAINT.