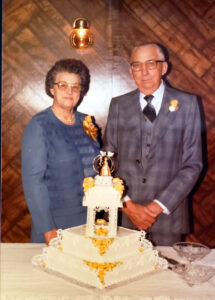 My father, John Rolf, was born and raised on a farm near West Point Nebraska. I experience my Dad as a very gentle, patient, and trustworthy man with a great trust in God. He was a hard working farmer with great respect for the land, as well as for others.  He was a man of few words, but very wise in his words and work, care for the family and in making decisions.

Dad spent his days working on the farm and tending to his wife and four children. Like Mom, Dad, too, lost his parents at a young age and was cared for by his siblings.  I can’t say for sure, but I think that may have been what bonded them in their early relationship. Both were happy to stay near West Point where neighbors, friends and extended family were plentiful.

While my mother spoke openly about her relationship with God, the Church, and family, Dad was quietly aware of God in his life. I often experienced God in my life when I was a child sitting on my dad’s lap combing his hair or sharing my concerns.

As a very young child I often went to Dad with my worries. He was always up early in the mornings to do the chores and milk the cows.  Often I would go into the barn and talk to him. My siblings thought I was a hard worker, assisting Dad with the milking the cows.  But I was just standing by his side talking to him about life.    In the summers when he was working in the field, Mother always made snacks and coffee which I took to him and had a chance to talk to him about my questions or concerns.  Talking to Dad help me to know and love God’s presence.

In the article of my mother I shared about our house burning down. A few years later mother was a patient in an Omaha hospital for several months after our youngest sister was born.  Often Dad would be up later in the evening working or reading.  I would sneak out of bed to talk to him about my concern regarding Mother, hoping that she would not die.  He reassured me that she just needs Doctors care but she will come home.  Again, I sense the wisdom of my Dad, and the trust of God’s care for us.

My only brother was too young to help Dad, so when I was about eleven or twelve, Dad would take me along to the fields to help with the work.  He taught me how to drive the tracker and to drive straight rows when planting corn.

When it was time for high school, my sister and I attended Notre Dame Academy as borders.  As a freshman, I had an emergency appendix surgery.  So the doctors called my parents to inform them. Dad drove on ice and snow to get to Omaha. I don’t remember what we talked about, but we didn’t talk about the surgery or my pain. I had learned from both of my parents not to complain but live with gratitude.

Thanksgiving break was always longer for students at Notre Dame Academy, because so many of us were expected to go home to help with the harvest. .

I never heard my Dad complain about anyone. He was gentle, kind, and respectful, but I discovered his sense of humor when I got older.   He didn’t have parents to raise him, but he found faith on his own, but probably grew in his faith from my Mom and her steadfast trust in God.

After all of us children were no longer at home, Dad said that he wanted to show Mom the world.  They enjoyed traveling the states, but also several trips to Germany since their ancestors were from there.  Trips to Nevada where my sister lived with her family were vacation they didn’t have earlier in life.

Dad had a great sense of humor. As he got older, it seemed to get became better and better.  Close to the end of his life he was in the hospital with heart problems He knew his days were limited.  Often he would ask me if he would die.  I said “yes, sometime,”’ how do you feel about dying, and he said, “I  have to face the music sooner or later!”   I know he was ready, he just didn’t know how long he’d have to wait.

I will always remember my dad as quiet, kind, respectful, peaceful, gentle man of God.