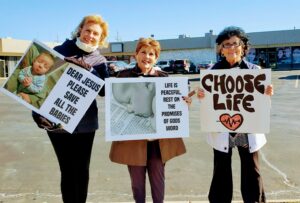 We just passed the anniversary of Roe vs. Wade which legalized abortion in the United States, we are faced with the horrific statistics of over 61 million abortions having been performed since 1973. There is hope, as over a million volunteers in the Pro-Life movement throughout the world continue to fight to end abortions and they are making a difference!

This year I decided to join the regional 40 days for Life Prayer Vigil to end abortion. (Sept.23 – Nov.1) an internationally coordinated campaign that aims to end abortion locally through prayer, fasting, community outreach and a peaceful all – day vigil in front of abortion businesses. As I was new to the procedures of  this  event  I contacted the regional coordinator Liz Sambol.  Liz attended Notre Dame Academy and graduated from Roncalli so it was a delightful experience connecting with her.  Liz  and Evonne Rodriguez met me near the Planned Parenthood Clinic where several were gathered in prayer holding pro-life signs. Planned Parenthood, described as a Women’s Health Clinic, performed over 43% of the abortions in the United States charging for all services including abortions. Low-income individuals receive federal tax funds through Title 10 and Medicaid for health services performed there, including abortions.  Emergency Pregnancy Service, a privately funded Women’s Health Clinic, located next door to Planned Parenthood, offers free services of ultrasounds, counseling, mammograms, family planning etc. except abortions. EPA gives women an alternative to choose life at no cost. 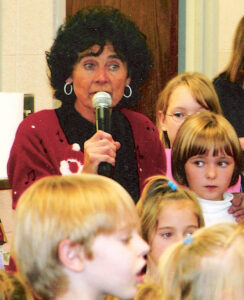 After praying with hundreds of individuals by Planned Parenthood throughout the “40 Days for Life” we were invited to join a Global Virtual Webcast which included 588 cities and 38 countries to hear the results of the prayer/action of over a million volunteers who prayed and fasted to end abortions. The results of our prayer is phenomenal. 700 babies’ lives were saved including 7 sets of twins in the city of New York, and the countries Portugal, Slovakia, Ukraine and Latin America. One lady reported, as they were preparing her for the abortion, overhearing the doctor saying, “This will be a hard one; she is carrying twins.” She got off the table and left to thank those outside the clinic who inspired her by their prayers and pro-life signs. Another lady held her one year old child. With tears in her eyes, she thanked those who stood in prayer in front of an abortion clinic in 2019 which she was going to enter to terminate her unborn. Their witness inspired her to keep her child. Through our days of prayer 107 abortion facilities closed including 3 out of 5 in El Paso, 6 abortion workers left their jobs and joined the Pro-Life Movement.

In the United States, Right to Life statistics show that we are still killing over 2,300 preborn children every day. ABORTION STOPS A HEART-BEAT.

Prayer Changes Things.  Pray for an End to Abortions!