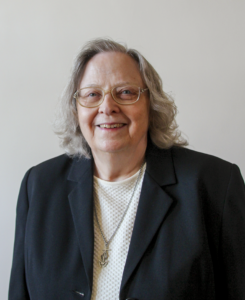 Previously while serving as a parish pastoral minister, I trained various liturgical ministers, frequently presided at weekday Word and Communion services in church, occasionally conducted vigil services, served as RCIA director, created liturgical environments, facilitated retreat experiences and faith-sharing groups and a vast array of other responsibilities. I also trained others for various leadership roles so that I could step back and encourage their giftedness in ministering among the parish community.

Often at the nursing home, I presided at a Word and Song worship service, which the staff listed on their calendar as “St. Jan’s Devotions.” Since I’m aware of Marian devotions, as well as that of other holy saints, I repeatedly questioned the appropriateness of that title. Anyway, we focused on our loving God who is always present within and among us, as well as everywhere in creation. Whatever transpired during our gatherings, these elderly individuals were always participative and most appreciative of our interactions.

Each week I traveled to homebound parishioners in town and in the surrounding rural areas. Together we visited about their concerns, then shared prayer, the Word and Eucharist. Usually, I listened attentively and compassionately, serving as a spiritual companion, not attempting to be a problem-solver nor a healer.

A friendly, very gracious near-by neighbor always greeted me with a smile and a hug, directing me to a comfortable rocking chair in her living room that had been her mother’s. As she rocked on another chair, we each rocked, visited and prayed together while sharing some of the ups and downs of lived experiences.

As we sat at the kitchen table, I recall a young man sharing his fears about his culminating illness and his worries about leaving his family without someone to provide for them, and crying about his immense loss of not being present as his children grew up. A middle-aged wife and mother was struggling with terminal cancer and stated that the Catholic Church had taught her how to live a good Christian life. Now she was questioning if the Church would help her truly know how to die well.

An ornery, feisty gentleman, who had previously owned a tavern, frequently offered me a glass of Crown Royal whiskey, which I declined because it was morning and I still had other persons on my schedule to see. His frail wife simply shook her head and said: “Just ignore him as I do.” (Although it never happened, I thought about changing my schedule for visiting them in the late afternoons when I’d be better able to partake of his offering!)

I miss visiting with those loving individuals. Today I strive to bring peace and blessings to others in our simple encounters.