Reflection for the Thirtieth Sunday in Ordinary Time – October 24, 2021

Mk 10:46-52   The story of Jesus healing the blind Bartimaeus who was begging by the roadside outside of the city of Jericho.  One of the few persons named as healed.

In the days of Jesus, physical ailments could be seen as punishment from God.  In John 9:2-3 the disciples asked Jesus “Rabbi, who sinned, this man or his parents?”  From my own life story, I quoted Jesus saying: “Neither this man nor his parents sinned, but this happened so that the works of God might be made visible through him.”  It seemed my beloved, late, aunt would not believe it as she was stricken with polio in 1952.  She would say, “What did I do to deserve this?”  My aunt loved the Lord and her church.  Her works and love were beautiful and everyone could see God working through her.

“Jesus, son of David, have pity on me.”  The Jews believed that the Messiah would be a descendant of King David…thus Bartimaeus believed that Jesus was the Messiah.  Perhaps he yelled this sentence instead of asking right away to be cured of his blindness because he might have been afraid to be too specific at first and thought that he might be refused.

“And many rebuked him, telling him to be silent.  But he kept calling out all the more.”  I admire the courage and persistence of Bartimaeus!  Do we continue to call my God even when “the crowd” says otherwise?

I found the possible meaning of “threw aside his cloak” before he sprang up and came to Jesus to be very interesting:  The cloak was probably government-issued to prove…give legitimacy to beggars (actually a license) for a person to beg and collect alms.  Also, the cloak was probably long and nothing was going to stand in the way of Bartimaeus running to Jesus!  Throwing off his cloak was FREEING!  HE IS GOING TO BE FREE OF HIS BLINDNESS and he immediately received his sight and followed him (Jesus) on the way.  Jesus was on his way to Jerusalem and soon to be crucified.  By following Jesus, Bartimaeus would become spiritually free, free indeed!  “How are you…how am I becoming freer by following Jesus?”

When Jesus asks: “What do you want me to do for you?”  Of course, Jesus knew what Bartimaeus wanted, but I think Jesus asks this question so many times throughout scripture so that WE are certain about that which we are asking.  He met my real need when I prayed: “Oh God, I don’t want to live like this…this isn’t living.”

Bartimaeus is another example of just how much our God loves us and will meet our needs.  How magnificent is God’s love to each of us?  God bless each of you and all of your loved ones. 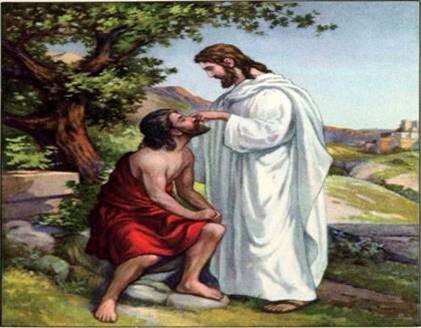