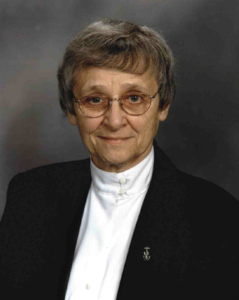 Sr Christine’s 100 years of life cannot be summed up in a short post like this. Her spirit will be missed. We have all considered her “God’s cheerleader”, walking through the halls of her community affirming staff, and visiting with others, raising everyone’s spirits.

She was a Notre Dame Sister from 1948 to 2020, 72 years, and she was the oldest member of the Notre Dame Sisters congregation. Throughout her life, she held many titles — Sister, teacher, principal, parish minister, interpreter, and volunteer — always a shining light to everyone who knew her. Upon her retirement in 2002, she continued to serve the community in many ways. She loved life, music, dancing, and singing.
​
Sr. Christine is a native of Cedar Rapids, Iowa and the daughter of the late Josef and Katerina (Barta) Elias.  She joined the Notre Dame Sisters in 1946, professing her vows on August 13, 1948. She served as an elementary grade teacher and principal in the dioceses of Dubuque, Lincoln, Salina and Omaha.  In Omaha she served as teacher and principal at St. Therese School and as principal at Assumption School.

After 33 years of teaching and administration, Sister Christine became a Parish Minister at St. Ludmila Parish in Cedar Rapids, Iowa, with special care for the elderly.  After her retirement in 1994 she continued volunteer work in Cedar Rapids, again visiting the elderly, assisting at the St. Vincent de Paul Thrift Store and serving as guide at the Czech/Slovak Museum. Sr. Christine’s strong Czech background and knowledge of the language were vital in the translations of both congregational documents and during international congregational meetings in Europe.

Sister Christine retired to the Notre Dame Motherhouse in 2002 where she continued her volunteer work and her strong advocacy against the Death Penalty in Nebraska.  In 2014 she began residency at Immanuel Courtyard where again she reached out to fellow residents to bring them her joy and affirmation.

Needing more assistance, Sr. Christine entered Immanuel Fontenelle in 2017.  The staff noted very often how wonderful it was having her there, meeting her on the hallways, cheering along the residents and the staff and singing for them very often.  She remained involved with activities until last fall when she entered Hospice care on the Fontenelle campus.  She died peacefully at 6:15 p.m. on April 20th.

Below are some loving comments about Sister Christine from her friends on Facebook:

Carla RF. – I have always had fond memories of Sister Christine. She was our principal at Sacred Heart. I admired her so much that I chose Christine as my confirmation name. Prayers for her family.

Marcy M. – Sr. Christine would come to my office every morning singing as beautifully as only she could. On. Occasionally there would be music in the activity area and I would never turn down a dance with this lovely woman. She will be in my heart and memory forever. RIP Sr. Christine.

Monica B. – She touched many lives at Assumption in South Omaha! Well done, good and faithful servant. She has joined the choir of heavenly angels!

Sharon WR. – Rest in peace, Sr. Christine. I still remember some of the funny stories you told of your days at St. Ludmila’s. You were my favorite principal in elementary school and it was even better to get to know you a little as an adult.

Denis P. – So happy for Sr. Christine to have gone to her eternal home. I had her as our principal at Sacred Heart in Atwood. I was very touched to receive a card from her as well as from Sr. Josita when my Dad died. She left a positive and indelible impression on this young student. May she Rest In Peace, and may the members of your community also find peace.

Leo H – Hate to disclose how old we are but Sister Christine taught me in First Grade at Assumption Grade School in Dwight, Nebraska. She impressed all of us with her teaching abilities and compassion for all her students. So much so we knew she had to be doing this for many years. Only later did we find out we were her first class to teach and she was scared to death. She sure has us fooled. 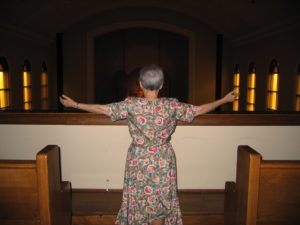