The Community of Notre Dame Sisters dates back to the 16th century. It was founded in Lorraine, France in 1597 by St. Peter Fourier and Blessed Alix LeClerc. 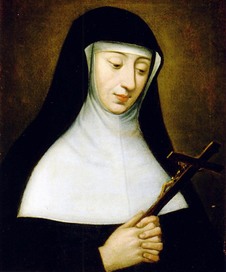 Alix LeClerc was born in Remiremont, France, on February 2, 1576, during a turbulent period in history. At age 19 she met Peter Fourier, the pastor of her parish. Following her dream, Alix pursued the idea of religious life and assembled a group willing to found a new order.

Alix was a mystic-dreamer whose dreams gave impetus to her vocation, mission and ministry. We recall the cradle, stalk of wheat and hammer, the vision which inspired the Notre Dame symbol; and her vision of Our Lady saying, “Take this Child and make Him grow.” Alix and Peter envisioned a society that can be changed for the better by empowering individuals, especially women, through Christian education. Alix’s influence was far-reaching in establishing many convents and schools and in tirelessly visiting the sick and the poor.

Peter Fourier was born in Mirecourt, France, on November 30, 1565, two years after the closing of the Council of Trent. He was educated in this post-counciliar period, with an emphasis on the meaning of Church and its apostolic mission. In 1585 he joined the Canons Regular of Saint Augustine, an abbey that was more concerned with materialism than with serving people. By his example of holiness, he tried in vain to lead the monks from moral decadence to their gospel charism. When he became pastor at Mattaincourt, he engaged the parishioners in active awareness of and involvement in moral and justice issues. He tackled all the hardships and suffering of his people, inventing ways to improve living conditions amid poverty, ignorance and superstitions.

At that time in France, it was normal for mainly boys to receive any formal education. This fact greatly disturbed both Peter Fourier and Alix LeClerc. Both believed that education would empower people, especially the girls who would grow up to become mothers in families. An education containing religious instruction would then benefit the entire family and strengthen faith in the family and society.

On Christmas night, 1597, drawn together by God’s providence, Alix LeClerc and Peter Fourier created “The Congregation of Our Lady: Canonesses of St. Augustine” in 1597. Together they dreamed and helped transform unmet needs of their time by making Christian formation available to all. They believed that society can be changed for the better by empowering individuals, especially women, through Christian education. Peter and Alix frequently experienced opposition from the very church that they sought to serve, as well as civil and domestic persecution.

The motto St. Peter gave to the Notre Dame Sisters is, “Help all and harm none.” Alix modeled, “Do the most good.”

The Congregation grew rapidly and spread throughout France. However, during the French Revolution all religious communities were suppressed. 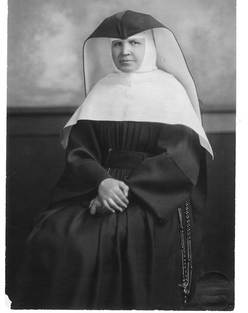 In 1853 Father Gabriel Schneider re-established the community in Czechoslovakia so that girls in his parish could receive a Christian education. The Motherhouse was established in Horazdovice, and again, many young women were attracted to this community and joined in the service of Christ by working in schools, orphanages, institutions for the disabled and homes for the aged.

Requests for Sisters came from the United States in 1907. In response to these requests, Mother Mary Qualberta and four other Sisters left their homeland in 1910 to come to work with the Czech people. They first worked at an orphanage in Fenton near St. Louis, Missouri, and later came to Nebraska and Iowa to staff Catholic schools. In 1911, five more Sisters came from Czechoslovakia and young women from the United States also joined the community. So the Notre Dame Community grew and the Word of Christ continued to spread in America. 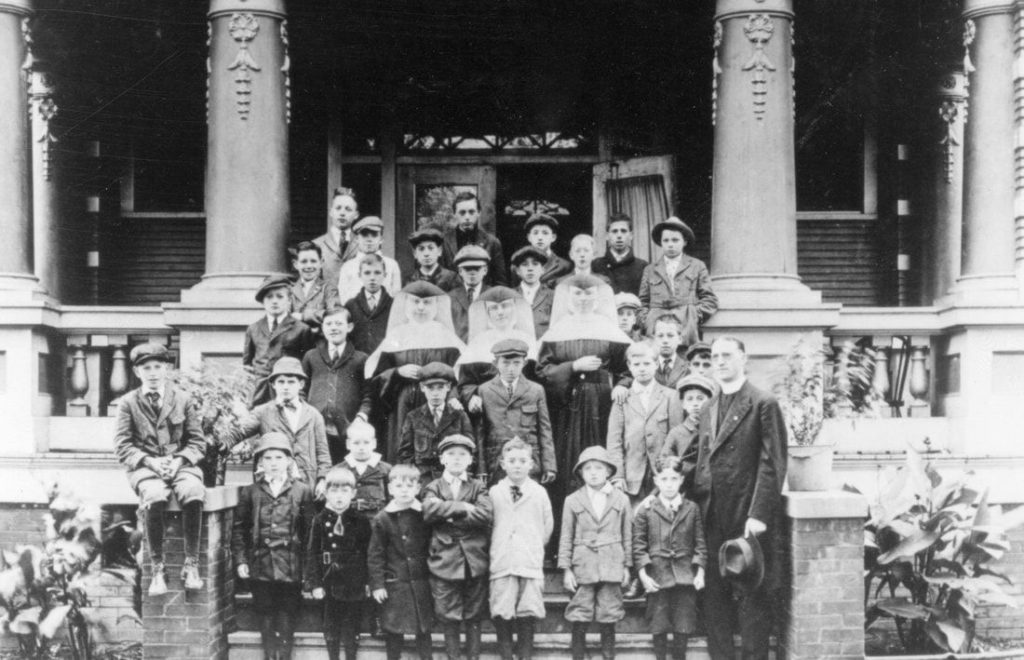 In 1917, at the urgent request of Archbishop Jeremiah Hart and with the help of God, Mother Qualberta decided to send two Sisters to staff Boys Home, founded by Father Flanagan at 20th and Dodge Streets in Omaha. Sister Rose Slevin, an American, and Sister Martha Djobek, a Slovak who did not know a word of English, were the two that were chosen to come.

In 1920 Father Flanagan sold Seven Oaks Farm, originally intended for Boy’s Town, at 35th and State Streets to the Sisters and they established their provincial headquarters in Omaha. 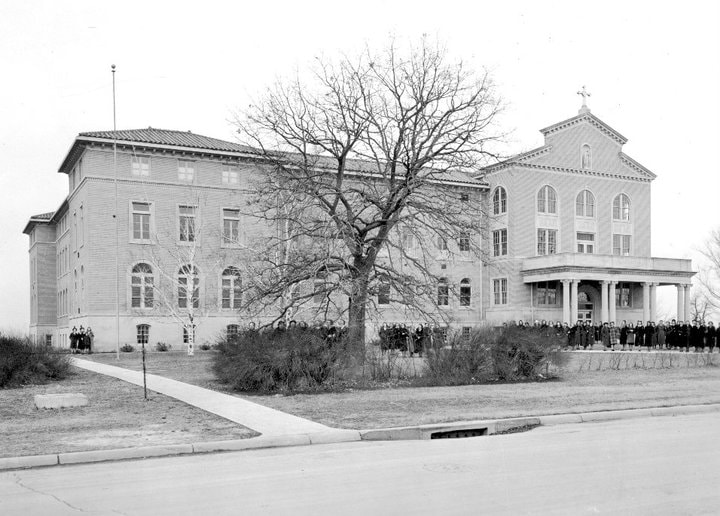 As the Congregation of the Notre Dame Sisters grew in the United States and Omaha, they continued their work in meeting unmet needs, and in 1926 the Sisters opened Notre Dame Academy under the leadership of Sr. Mary Qualbertina Vanek. The school opened with 15 students, and by the end of the first academic year, attendance had grown to 26 students from around the Midwest.

​The Sisters educated thousands of young women throughout the Academy’s 48 years, while additionally providing a comprehensive experience in faith, civic responsibility and community living. They embraced the importance of a well-rounded education, offering numerous classes in a variety of arts and music, along with the core courses provided to the young women.

Today the average age of the Sisters is 79, yet they continue to educate, inform, enlighten and advocate. They are teachers, nurses, chaplains, pastoral ministers and spiritual directors. They care for and work with the ill, infirmed, minorities, marginalized and those affected by poverty, violence and social disadvantage.

The Sisters who are now “retired” are still active in ministry by volunteering at various organizations, attending funerals and visiting the sick, elderly and detained, taking mission trips to Central America, baking, sewing, knitting, crocheting and making various other crafts for the gift shop and fundraisers. 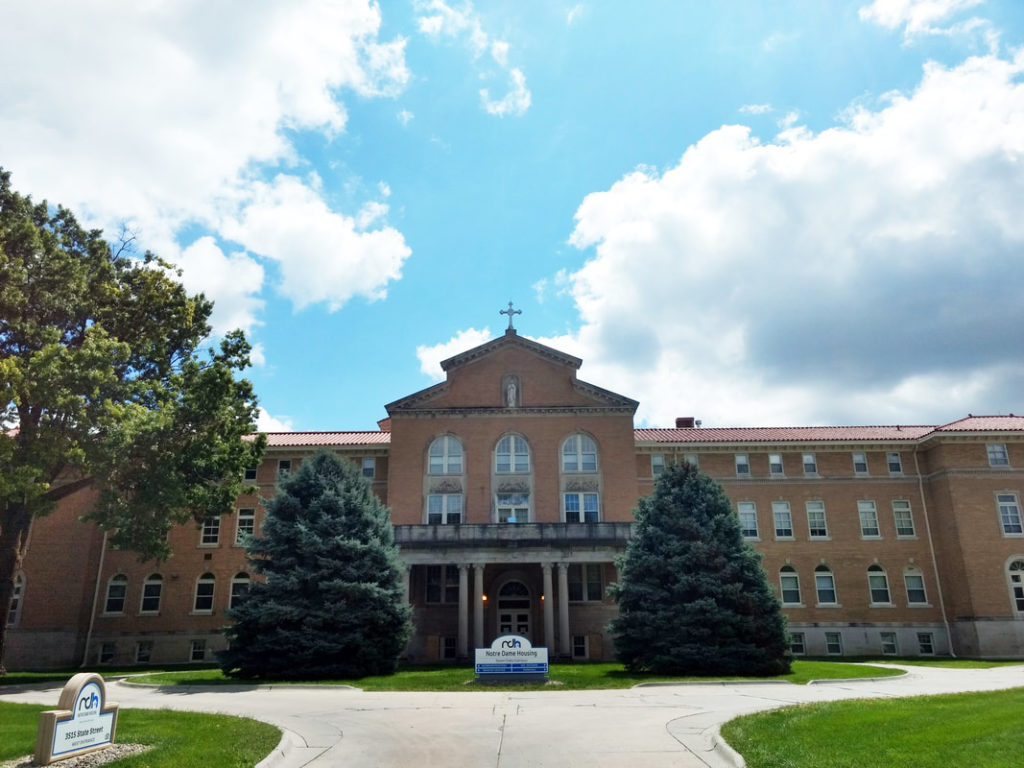 Prayer is also an integral part of their lives and flows through all of our ministries. They give comfort to anyone in need by sending cards and letters, making phone calls and visits and with their prayers.

Today the Sisters are involved in a wide variety of ministries in the Midwest that include: education, nursing, pastoral ministry, care of the elderly, housing, religious education, social work, counseling, diocesan ministry, administration, mission work and a variety of other good works.
​
In all these services, the Sisters strive to carry on the mission Our Lady first gave to Alix LeClerc: “Take this Child and make Him grow.”