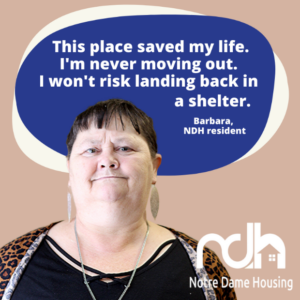 “Don’t expect everyone to understand your journey, especially if they’ve never had to walk your path.” That is the adage that hangs in Barbara Scott’s kitchen over her sink. She refers to it often like a mantra.

Barbara has lived in a one-bedroom apartment at Notre Dame Housing for four years. She is a staple at any games table and fills spare time volunteering at various programs, and can always be seen with a helpful smile.

If you can’t imagine yourself in your late 50s, calling shelters to see if there is room for you, then you haven’t walked Barbara’s path.

Barbara was born and raised in Omaha and fell in love with her partner of 40 years, Frank, when she was only 21. Barbara always had a strict moral code: no drinking, no smoking, always hold down a job. And she lived by that. Frank passed away after heart disease and lung cancer took him. Barbara continued working after he died, until she fell at work and broke her arm so severely that it required a steel plate. She moved in with family and dealt with infections and more surgery.

“I realized bills going unpaid, more alcohol in the house, and some of her things missing,” Barbara said. “They turned out to be stealing from me, so I put my stuff in storage that day, sold Frank’s truck, and went to a motel. I called another family member to find me a room at a shelter.”

Then, it came to pass that Barbara required spinal surgery, and her family offered to put her up again. “So, I elected to leave, thinking that family would take care of me. That was not good sense on my part.”

Again, things went missing and Barbara decided to take her chances in a shelter. So, she moved again, this time into a crowded urban Omaha shelter, with 37 people sleeping in the same room. That’s where she learned about Notre Dame Housing and applied for an apartment.

To her surprise, she was accepted as a tenant and moved right in.

“This place saved my life. I’m never moving out. I won’t risk landing back in a shelter,” Barbara said. “I find it to be incredibly affordable. If you were looking for an apartment in Omaha, even without all the programs and services, it would cost $1,000 a month, easy. It’s affordable and have my own apartment, heat and electricity, a food pantry just down the hall. I have freedom and privacy at the same time.”

Barbara has found a home here, and helped many others feel at home as well. Barbara is always helping out with events or the food pantry or inviting folks to sit and play cards with her.

“This is all a blessing, and I am continually thankful.” 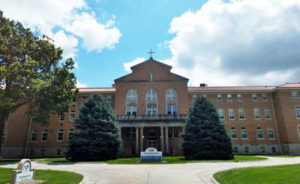