423 Christmases with the Notre Dame Sisters 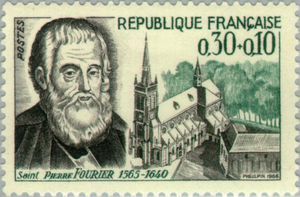 In the central part of Lorraine, France was the little town of Mirecourt where Peter Fourier was born in 1565. He grew up in a deeply religious family. At age 10 he was tutored by a Franciscan Friar. At age 13 he entered the University at Pont-a-Mousson. There he became fluent in Latin, Greek and the French spoken by the nobility. He entered the Canons Regular of St. Augustine when he was 20 years of age. He was noted for his gentleness, kindness and special devotion to Our Lady.

On February 25, 1589 Peter was ordained a priest. In 1597 the Cardinal of Lorraine offered Peter a choice of three parishes. After seeking advice from his family, he chose Mattaincourt, a very poor and spiritually destitute parish.

Father Peter lost no time in paying visits to his people, greeting parishioners and studying their souls. He gave catechism instruction to the children twice a week. His sermons were sincere, reassuring the people that his only interest was for the salvation of their souls. Father Peter noticed that, while there were schools for the boys, the education and instruction of the young girls was neglected. He resolved to establish a school for little girls to prepare their minds and hearts to be future mothers. 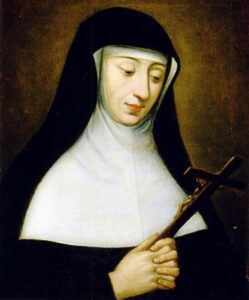 In the neighboring town of Remiremont Alix Le Clerc was born on February 2, 1576. Her parents were honorable people who were well-to-do and had connections at the Court and in the town. Alix was a very pretty girl, charming and lively. She loved the world, enjoyed music and dancing, and attracted many friends. When she became ill at age 17, someone gave her a book on the judgments of God. Reading that book changed her life. At 19, she had a dream where Our Lady, dressed in a religious habit, was standing near the altar in church. Our Lady spoke, “Come, my daughter, and I shall receive you.”

Two years passed. Alix had no one to instruct her in virtue. When her family moved near Mattaincourt, Alix attended church services where Peter Fourier preached on the beauty of virginity. Alix felt a call from God but did not feel sufficient love of God to renounce herself.

However, she stopped attending social gatherings, gave up dancing, dressed as a peasant girl, and confided in Father Peter. Peter Fourier rejoiced when Alix confided that she wanted to join a religious order. Listening to Alix, he was certain that she was the one to revive the education of girls. He recognized her to be the foundress of a new congregation. However, he advised her to pray much and to consider joining the Poor Clare congregation. Alix followed his advice, but as she prayed, she felt a strong urge to found a new house of Religious Daughters. When she confided this to Father Peter, he feared she would not attract enough young girls to follow this new vocation.

Six weeks later, four young girls, all inspired like Alix to leave the world, joined Alix. Alix LeClerc had paid her first visit to Peter Fourier on July 2, 1597. The first act of the new Canonesses of St. Augustine was the appearance of the five young women, pronouncing vows, at the Midnight Mass on Christmas Eve, 1597.

(From the Archives submitted by Sr. Anita Rolenc, ND)