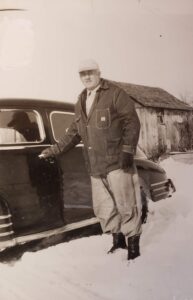 Joseph Rolenc, the father of Sisters Karen and Anita, was prayerful, generous, and patient. We realized Dad prayed the rosary often when, at the time of his death, the rosary was in the pocket of the trousers he was wearing. The crucifix on the rosary had the Body of Jesus tied to the cross with sewing thread!

Since Dad had no sons, each summer he hired a young man from town to help with the harvesting of wheat and oats. While Dad used the reaper to cut the crop and tie them into bundles, the young man was to stand up the bundles into a shock so the grain would not spoil if left on the ground. One year Karen and I were shocking the bundles, and noticed that the man would put up a shock and then lie down where Dad could not see him and sleep! That evening, after dinner, Dad told the man that he no longer needed him. He took him back to town after paying him a day’s wages. Karen and I were the “hired man” the rest of that summer!

Our father was generous to relatives, friends, and co-workers. At the end of the harvesting of wheat and oats at the farms of two uncles, our neighbor, and ours, Dad provided beer and pop for the threshing crew of about 8 men and boys and about seven women and girls who prepared the mid-morning and mid-afternoon snacks and the noon meal for the crew. 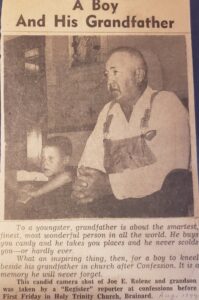 Dad was patient whenever we did anything wrong. He would explain what we should have done and then expected us to follow his advice. One day Dad was planting corn (in the days when he sued horses to pull a corn planter). Karen and I were to take a sack of seed corn to him. On the way we dropped it, spilling the corn. We tossed some into the pig pen and the rest into the sack and carried it to Dad. He opened it, and immediately knew what we had done. He did not scold us, but simply told us to take the sack to the garage and clean all the dirt clods out, because the corn planter would have planted dirt clods along with the seed corn.

Dad was a math whiz. We’d have arithmetic problems as homework that we could not solve. Dad would explain how to work the problem. As we struggled with paper and pencil, he’d have the problem worked out in his head and told us the answer before we figured it out!

When Dad’s friends sympathized with Dad that he had ANOTHER daughter, Dad’s comment was, “If I had a son, I’d have to buy him a farm; but with daughters, I just buy a piano.” He did! Dad was very proud that his two older daughters married and provided six grandsons and one granddaughter, and that the two younger daughters became Notre Dame Sisters!