A Thanksgiving celebrated after the fall of communism

Thirty-one years ago the Notre Dame Sisters had reason to be thankful. 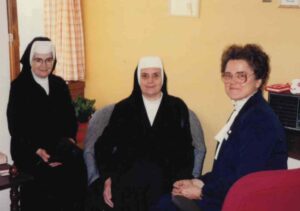 Mother Purissima Kazdova, mother general of the Notre Dame Sisters’ international congregation, was free to speak her mind when she arrived in the United States for an official visit. In 1984 when Mother first traveled to America, she had to be cautious of what she said because the officials in Czechoslovakia read the American newspapers and would have kept her from traveling outside the country. It was on November 17, 1989, that the “revolution without blood” ushered in freedom in her country which was ruled by the Communists for 40 years.

Mother Purissima, with her assistant Sister Sidonia Sviglerova, came to review the work of the Notre Dame Sisters in the Midwest. Mother related that in 1950 the Communists seized the properties of religious orders throughout Czechoslovakia, and ordered the clergy and nuns to discontinue their ministries.

Even though the Communists would not allow young women to join religious communities, the Notre Dame Sisters had “secret sisters” who took vows and lived in their own family’s homes without anyone, including their parents, knowing of their commitment. Only the Mother General and the Sister in charge of their training knew these “secret sisters” who wore no habit or any religious insignia.

While in the United States, Mother Purissima and Sister Sidonia visited the Notre Dame Sisters in Nebraska, New Hampshire, Missouri, lowa, Colorado, and on the Pine Ridge Reservation in South Dakota. At every place of ministry, the visitors were impressed and overjoyed with the interaction of children and young adults in the schools, and with the varied work of the Notre Dame Sisters of the Omaha Province.