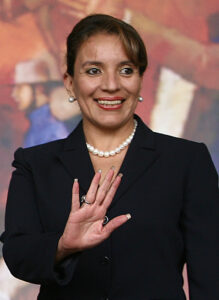 Xiomara Castro is Honduras’s first female Democratic socialist president after her main rival conceded. Castro, 62, ran on an anti-corruption platform with promises to end what she deemed a violent narco-state controlled by the illegal drug trade. Her election ends the 12 years of conservative National Party rule, much of it marked by scandal.

“The Honduran people exercised their power to vote in a free and fair election,” U.S. Secretary of State Antony Blinken said Tuesday on Twitter. “We congratulate them and President Elect Xiomara Castro and look forward to working together to strengthen democratic institutions, promote inclusive economic growth, and fight corruption.”

Castro will succeed President Juan Orlando Hernández, whose last term in office was clouded by investigations into his alleged ties to drug trafficking. Hernández’s brother, Tony, was sentenced in U.S. Federal court this year to life in prison plus 30 years for drug trafficking.

This election represents the first time a narco dictatorship in the western hemisphere has ended democratically. Honduras will be an example to other countries in the region.

Honduras is currently the biggest source of migration to the United States — a fact that critics blame partly on the Hernández administration. While the Biden administration is crafting a policy aimed at deterring migration, the Honduran economy depends on money sent home by its citizens working in the United States. These citizens send home roughly 20% of the country’s gross domestic income.

The Notre Dame Sisters have a long history with the Honduran community. Sr. Joan Polak spent many years teaching in Honduras and I have spent many years providing support for those seeking citizenship and learning English in our community.

This election is important to me because it opens doors to more bilateral work between the United States and Honduras. It is also a step toward better relationships between our government and the Honduran government.

Our Honduran sisters and brothers respectfully demand that the U.S. Administration of President Biden respect the results of the election and refrain from supporting any coup d’etat.

I ask you to reflect about this election: the importance of it to our country, countries in the region, the citizens of Honduras and the positive effect this can have on so many. I encourage you to call your congress persons and ask them to respect the results of the election. Your phone call or email can have a direct impact on the future of the Honduran people.