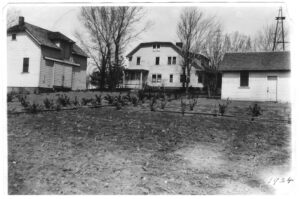 A Poultry Farm in Florence

On March 3, 1855, the United States government granted many land grants to its officers and soldiers. The widow Mrs. Rhoda Rich obtained a tract of 160 acres in the Florence, Nebraska area as a pension after her deceased husband, Israel Rich, a captain in the War of 1812 with England.

Throughout sixty-five years, the property was owned by many people. The latest owner was Miss Lucy C. Harding who was married to L.C. Randall Polock of Omaha. She purchased the two quarters 185 and 186 on March 4, 1904. About five years later, Miss Harding built a residence on the property.

Father Flanagan and his Boy’s Home

She was advised to conduct a poultry farm in grand style, but it was not a profitable venture. The small farm did not produce enough grain to feed the poultry and the cattle on the land. It was necessary to buy feed which caused her to go into debt so deeply that she was forced to sell the property. For a long time, there was no buyer. Although the farm was priced at $9000, Miss Harding had a debt of $14,000. Finally a buyer was interested. Rev. Edward J. Flanagan needed a larger home for his boys who were, at the time, living in a rented house called the “German Home” on South 13th Street. However, Father Flanagan had no capital, so His Excellency Archbishop Jeremiah J. Harty bought the property in his name on September 10, 1919. 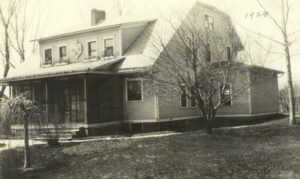 In November, while visiting the Notre Dame Sisters who worked at Boys’ Home, Sr. M. Qualberta Krivanec learned that Father Flanagan planned to sell the ten acre farm in Florence and buy a larger one. At Father’s invitation, Sr. Qualberta and Sister Ludmila Panek, who worked at Boys’ Home, went to see the farm in Florence. Despite the unfavorable weather and the falling snow, the Sisters judged the “Seven Oaks Poultry Farm” to be a suitable location for a novitiate and possible motherhouse for the Sisters. The farm located on a high hill had enough ground for foliage and vegetables, several well-kept buildings, and a nice residence equipped with city water, electricity and a furnace. It’s accessibility to the street car and the proximity of a parish church were added benefits.

Sister Qualberta recalled the advice of Rev. Mother M. Cyrilla Marsik that a motherhouse is best situated on the outskirts of a large city so there is a sufficiency of fresh air, tranquility and home produce, yet close enough to the advantages of a city. 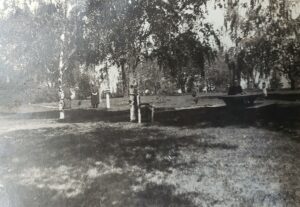 The price was the problem. Father Flanagan needed the money in order to buy the larger forty acre Outlook Farm west of Omaha. But Sister Qualberta needed permission from the Superior General in Europe for such a major transaction as purchasing property. Yet, trusting in God, she managed to scrape up $14,000 which Father Flanagan paid for the farm, and loaned it to him at 4% interest until she obtained permission from Rev. Mother Cyrilla to buy the farm. That consent arrived February 24, 1920. The Sisters took possession of the property in March.

Sisters roll up their sleeves and clear the land

The tenant, John Foral stayed on the farm until June 15, 1920 when Sister M. Agnes Vampola and Sr. M. Boleslava Tomecek arrived. Their task was to purchase the most necessary furniture, equipment and food. Three days later three more Sisters and three aspirants joined them. Before the newly-acquired home became the motherhouse for all the Sisters, much work had to be done on the buildings and the land. Most of the labor was done by the Sisters themselves. With the help of the boys from Boys’ Home, the Sisters tore down two chicken houses and two sheds. In their place they planted a vegetable garden. Hired laborers, volunteers and benefactors felled trees and planted numerous trees, grape vines and berry bushes.

The first Holy Mass was celebrated on the feast of the Apostles St. Peter and St. Paul on June 29, 1920. The Sisters had borrowed a little altar and placed it in the dining room which served temporarily as a chapel. The parishes of Dodge, Howells, and Brainard donated church articles like vestments, missal and missal stand, cruets and altar cloths. In the fall of 1920 a chapel and several other rooms were added to the residence.

By the end of 1920 the one-time Seven Oaks Poultry Farm served as the novitiate for training new members and as a centrally located motherhouse for the forty-eight Sisters who taught in eight elementary and high schools in lowa and Nebraska. From this humble beginning, the Notre Dame Sisters expanded their property to include the construction of Notre Dame Academy for the education of girls, and the Notre Dame Motherhouse for the governance of the Omaha Province.