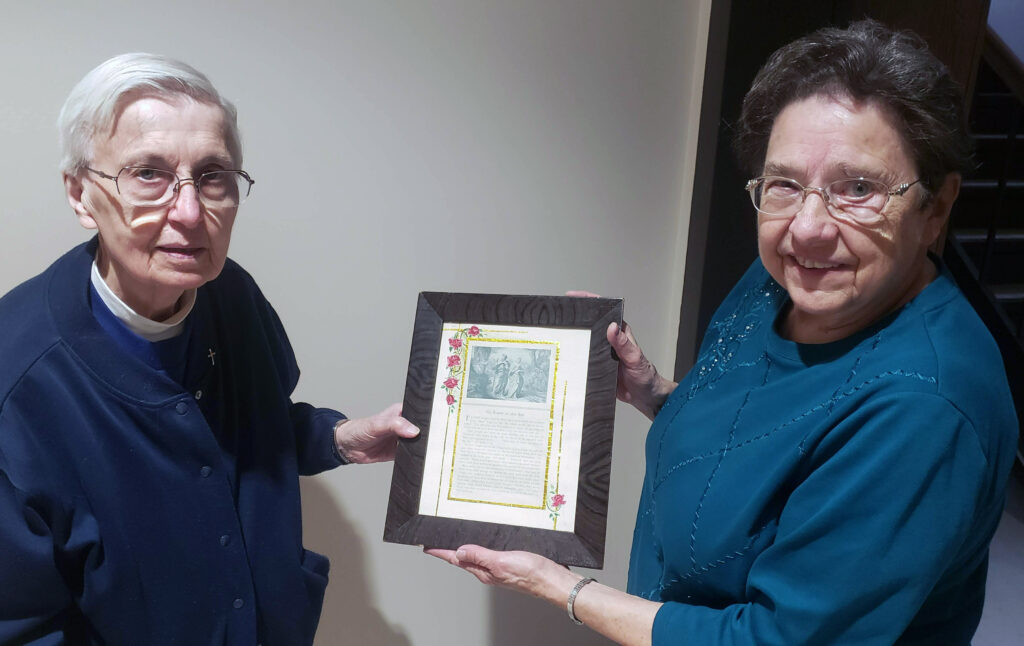 The Sisters had a tradition known as Las Posadas (The Lodgings) which commemorated the pilgrimage of Mary and Joseph to Bethlehem as they sought shelter for the night. It is celebrated chiefly in Latin America, Mexico, Guatemala, Honduras, Cuba, and Spain. It is typically celebrated each year between December 16 and December 24. Latin American countries have continued to celebrate the holiday, with very few changes to the tradition.

The Notre Dame Sisters have carried this tradition into their community. Various rooms such as the offices of the provincial president, the treasurer and the house coordinator; the novitiate, the candidates’ room, the sewing room and the kitchen would be assigned a particular date. A simple altar would be prepared in each room.

The pilgrims Mary and Joseph, in the person of the Sisters, would carry a framed picture of Mary and Joseph walking to Bethlehem. They stopped at the assigned room and recited the poem “Who’ll Give Us Shelter?” and then knocked on the door. A conversation between the Hostesses (the Sisters inside) and the Pilgrims (those outside the door) began. The door was opened and the fourth verse of the poem was recited.

The following evening, those hosting the Pilgrims took the picture to the next assigned “residence” and repeated the process. The purpose of this tradition was to emphasize the importance of preparing our hearts for the coming of Jesus as we prepared for Mary and Joseph on their journey to Bethlehem.

Who’ll Give Us Shelter?

Far is our home and far our friends. And long the road that toward them wends.

Have you no room for Mary and Me?

Faint are we at close of day. And spent the stores brought for the way.

Have you no crumb to spare for such folk as we?

No blanket have we for his bed, No pillow for his baby head. Have you no place for such as Infant as he?

HOSTESSES: Who is knocking at our door?

HOSTESSES: What are they asking for?

PILGRIMS: That you may mercy show;

They are in great dismay.

HOSTESSES: With all our hearts we take them in.

(OPEN THE DOOR) PILGRIMS: Thanks and thanks again.

For this kind deed, you will be greatly blessed.