“We do not have surplus Sisters, but we think that God will bless our entire Congregation if we make the sacrifice.”

The Pontifical Commission for Latin America sent a special envoy to Notre Dame University in South Bend, Indiana in August, 1961, to make an appeal before the Conferences of Major Superiors of Men and Women of the United States assembled there for the Second Congress of Religious. The envoy asked for personnel to Latin America, proposing that each religious province contribute 10% of its membership within the next ten years.

The membership of the Notre Dame Congregation in Omaha at the time was 133, thus 10% would require thirteen Sisters by 1970. Impressed with the enthusiastic work of Rev. James J. Stewart, Notre Dame’s chaplain and director of all Omaha Archdiocesan Social Action groups, the Provincial Superior, Mother Alphonsa Suda, with her council, agreed to send two Sisters to the proposed St. Cecilia Parish in Talcahuano, Chile. The Archdiocese of Omaha was sponsoring this new parish which was in its early formative stage. Rev. Aloysius James McMahon, who for three years served in Peru with the Society of St. James, was assigned as pastor of St. Cecilia.

Mother Alphonsa, in a March 1963 letter to the Superior General M. Vlasta Ptak in Javornik, Czechoslovakia, wrote: “We do not have surplus Sisters, but we think that God will bless our entire Congregation if we make the sacrifice.” She then requested permission to send two Sisters for training in preparation for mission work. With the Superior General’s permission, and after careful consideration and prayer, two Sisters were chosen from among the volunteers for pioneering this mission work in Chile. Chosen were Sister M. Mariette Melmer, the superior and a teacher at St. Therese School in Omaha, and Sister M. Joan Polak, a teacher at St. Michael School in Harlan, lowa. The Sisters then enrolled in Confraternity of Christian Doctrine Leadership Courses at Marquette University in Milwaukee, Wisconsin. 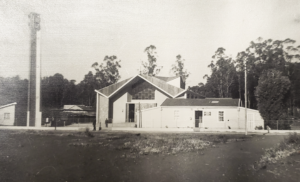 On June 12, 1963, His Excellency, Archbishop Gerald T. Bergan conferred mission crosses on the Sisters and lay papal volunteers in a formal ceremony at St. Cecilia Cathedral. In late July, Mother Alphonsa wrote to His Excellency, Manuel Requiristian of Concepcion, Chile, requesting her permission and blessing on the Sisters who will be the first missionaries in his diocese.

Sisters Mariette and Joan departed August 26, 1963 for Ponce University in Puerto Rico for a four-month intensive course in Spanish and missiology. They left Puerto Rico on December 17, 1963, and arrived in Lima, Peru where they spent several days as the home for them in Chile was not ready. On December 27, they continued on to Santiago, Chile.

The Notre Dame Sisters’ foreign mission work in Talcuahano was formally initiated on January 6, 1964. One of the first tasks was taking census of the Catholics in the area which would comprise the parish boundaries. They then organized catechetical classes for the young children and adult education classes. The Sisters spent their days as catechists, club moderators, and adult educators. They assisted with Legion of Mary meetings, attended parish Council meetings, and helped with Cursillo gatherings. The Sisters organized “Centro de Madres” for women to teach one another crafts such as knitting, crocheting, rug making and items to decorate their homes or to sell. 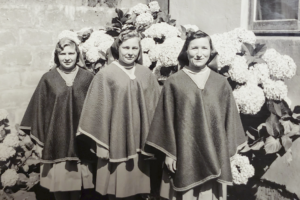 Other Notre Dame Sisters were assigned to the mission in Chile. In May of 1964, joined the two, but left a year later for updating her nursing education in order to minister to the sick in the parish. Sister did not return to Chile.

Sister M. Peter Herold received her Mission Cross in 1966 on the day of her final profession, left for Chile in December, but returned to Omaha in August, 1967. Sister Mary Sudik prepared for mission work in the summer of 1967 and arrived in Chile to replace Sister Joan in late August.

In 1970, the Omaha Archdiocese decided to terminate its mission service to St. Cecilia’s at Talcahuano, Chile for three reasons: the Notre Dame congregation was unable to supply an increasing number of Sisters to make life in a distant foreign country agreeable; the Omaha Archdiocese found it difficult to assign priests willing to commit themselves to a life in a foreign mission; and because the Chilean diocese was able to supply its own clergy and the Talcahuano parish was able to manage its own affairs. The Sisters returned to the United States April 19, 1970. The priests staggered their departure over the months; the last one leaving in June of 1970.

Today the parish of St. Cecilia in Talcuahano, Chile is flourishing and can claim its own priest who was among the youth trained by the American missionaries.