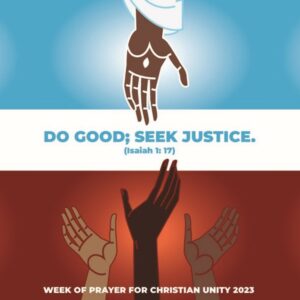 Even though I grew up in the Catholic world before Vatican II and heard regular sermons from an exceptionally fierce, Irish pastor, I never did believe that Protestants were doomed to hell. I heard a different message from my father. His frame of reference was always what “the good Lord” would say.  Papa didn’t argue or lecture but dropped simple observations during daily interactions. His influence formed a sense in me that Christian disunity is a shocking deviation from Jesus’ intentions for the church. By the time I graduated from high school, the Catholic church was beginning seriously to  repent of its part in the scandal of Christian infighting so contrary to the will of “the good Lord.”

This week we begin the annual Week of Prayer for Christian Unity, January 18-25—an observance that goes back to the beginning of the 20th century. The awareness of the need for prayerful healing of Christian disunity is much older.  As early as 1740 prayer for and with all churches were being offered by members of a Scottish Pentecostal movement and their American counterparts. Later Christian missionary preachers were forced into unescapable self-reflection by the people to whom they preached, who had embarrassing questions about the loving Jesus each denomination preached and the competition they practiced.

Today the World Council of Churches and the Vatican Office on Christian Unity collaborate on the week of prayer, choosing a theme proposed by one of the member churches. This year’s theme was prepared by the Minnesota Council of Churches on a reading from the first chapter of the prophet Isaiah, “Learn to do good, seek justice, rescue the oppressed, defend the orphan, plead for the widow.” (1:17) They lift up their experience of the murder of George Floyd to inspire concrete reflection. Who needs justice and defense today in the light of American racism and worldwide systems of oppression? How are the churches complicit in continuing the belief that White people are innately superior to others and deserve the continuation of the unearned advantages they have historically enjoyed?

Prayer for Christian unity in our current circumstances requires that we face and respond to the profound disunity surrounding us and among us. This can take and infinite number of forms: engaging in honest self-reflection and education, committing oneself to learning about local social issues, having an uncomfortable conversation with a friend about the realities of immigration, celebrating and supporting positive progress, or working through the complexities of a piece of legislation before taking a position. Often the action which I currently need to face is one that has been nagging me and that I have been pushing away! Sometimes it seems too distressing or complicated. It helps me to remember that first steps can be small steps. And that the voice of “the good Lord” calls me.

Note: Christians in the southern hemisphere are likely to celebrate this observance at another season because January is vacation time in many countries. Pentecost is a popular date for prayer for Christian unity.