Today in 1597, the Notre Dame Sisters were created.

On Christmas night, 1597, drawn together by God’s providence, Alix LeClerc and Peter Fourier created “The Congregation of Our Lady: Canonesses of St. Augustine” in 1597. Together they dreamed and helped transform unmet needs of their time by making Christian formation available to all. They believed that society can be changed for the better by empowering individuals, especially women, through Christian education. Peter and Alix frequently experienced opposition from the very church that they sought to serve, as well as civil and domestic persecution.

The motto St. Peter gave to the Notre Dame Sisters is, “Help all and harm none.” Alix modeled, “Do the most good.” 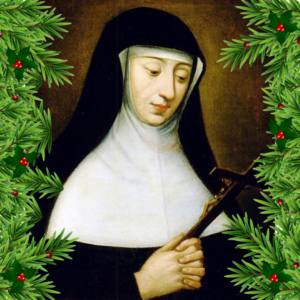 Alix LeClerc was born in Remiremont, France, on February 2, 1576, during a turbulent period in history. At age 19 she met Peter Fourier, the pastor of her parish. Following her dream, Alix pursued the idea of religious life and assembled a group willing to found a new order.

Alix was a mystic-dreamer whose dreams gave impetus to her vocation, mission and ministry. We recall the cradle, stalk of wheat and hammer, the vision which inspired the Notre Dame symbol; and her vision of Our Lady saying, “Take this Child and make Him grow.” Alix and Peter envisioned a society that can be changed for the better by empowering individuals, especially women, through Christian education. Alix’s influence was far-reaching in establishing many convents and schools and in tirelessly visiting the sick and the poor.

Peter Fourier was born in Mirecourt, France, on November 30, 1565. When he became pastor at Mattaincourt, he engaged the parishioners in active awareness of and involvement in moral and justice issues. He tackled all the hardships and suffering of his people, inventing ways to improve living conditions amid poverty, ignorance and superstitions.

At that time in France, it was normal for mainly boys to receive any formal education. This fact greatly disturbed both Peter Fourier and Alix LeClerc. Both believed that education would empower people, especially the girls who would grow up to become mothers in families. An education containing religious instruction would then benefit the entire family and strengthen faith in the family and society.