Reflection for the Thirty-Third Sunday in Ordinary Time…November 15, 2020

Jesus told his disciples this parable:

When the master returned he was pleased with the first two servants who multiplied their talents but was angry with the one who did not. He was thrown out of the master’s home for his failure.

“Talents” in today’s reading refers to money. We are more familiar with talents being something we share with others, something to entertain them, something to show them. Money and talents mean entirely different things depending on where you live. Whether you are a philanthropist or a Christmas bell ringer you are sharing the talents you have to give.

Will God be pleased with what we return to Him – will we multiply our talents or bury them? 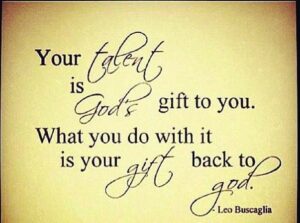