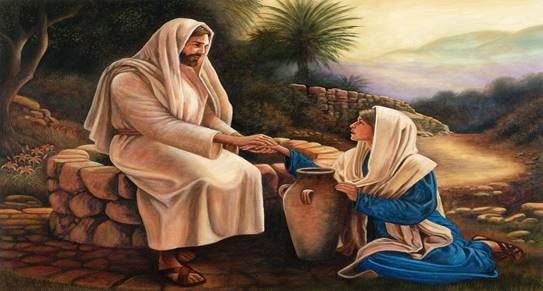 The Samaritan woman we read about this weekend is a truly fascinating story. An ordinary trip to a well turned out to be anything but ordinary. First of all, it was strange to find a Jewish man, we know as Jesus, sitting there alone. Then, to her utmost surprise, he began talking with her. I read recently that the orthodox church called her Photini, representing those who feel like an outcast, which the Samaritans were considered to be by the Jews. Then, HE asked HER for a drink of water. What next! We know the story, Jesus obviously knew all about her life. She was said to have five husbands and the one she has now is not her husband, and that her people had lost faith in the true God. They no longer understood what, who, where they were to worship. They were floundering. Jesus had much to teach them. Photini seemed to totally engaged in the conversation, open to listen, to question, to learn. She understood this was a very unique person. He treated her with utmost dignity and respect as he spoke of the true God who is worshipped in Spirit and in Truth, not only in one place but everywhere and anywhere. His message and his manner of speaking imparted hope and promise she had never heard before. Could he be the long awaited Messiah? Indeed he was! He is! This was too much! She HAD to share her experience – let others know. She ended up leaving her bucket at the well and ran to tell the townsfolk. Can you imagine her excitement in sharing her experience of the Jesus she had come to know! Not only did the townsfolk listen, they came back to meet Jesus, and then invited him to stay with them. Imagine the powerful witness of one woman who without question, accepted totally the love, forgiveness, the life-giving message of Jesus! St. Photini, pray for us as we carry on this sacred message.

A further note: Biblical Scholars are skeptical about taking this Samaritan woman story at face value, as I have done above, and offer other interpretations. Christine Schenk in an article entitled, ‘Clueless Preaching about the Samaritan Woman Misses the Point’ expresses one of those views in an article that appeared in NCR on May 6, 2016 and is now on line.

In it Schenk recounts an interpretation offered by New Testament Scholar, Sandra Schneiders, IHM. She points to Israel’s use of spousal metaphors to describe God’s passionate, covenant love for the chosen people. Samaritans had strayed from worship of the one true God. Schneiders suggests that Jesus was speaking metaphorically, not about an individual like Photini, but about Samaria’s infidelity — pointing out that Samaria’s current “husband” was not a source of living water for the people.”
​
The article repeats the fact that the Samaritans had broken the covenant, compared at times to a marriage vow, they had made with God. It says much, much more but we can be sure of one thing. We are constantly being reminded of God’s unconditional love and our call to be faithful. How blessed we are! ​