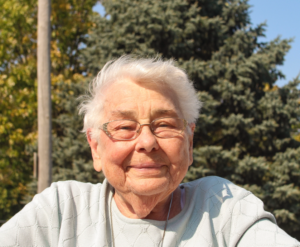 While she was born in Brainard, Nebraska, Sr. Joan Polak, ND, traveled far from the Midwest, making her Central and South American ministries some of the most impactful in her life.

Celebrating 70 years of religious profession, Sr. Joan is  daughter of the deceased Ivan and Frances Polak and part of an extended religious family in Nebraska including the Hanus, Rolenc, Havlovic, and Janousek families who were first and second cousins who all became Sisters as well.

Sr. Joan attended Notre Dame Academy as a boarding student from 1942-47 and then received a Bachelor‘s degree in History and Education from Duchesne College after attending College of Saint Mary.

“I enjoyed boarding here very much. I found a group of friends with whom we make mischief together,” Sr. Joan said. “We went to a movie downtown when we were supposed to be doing research at the library. Of course, we made it home late, and everyone was terribly worried. We were grounded for a time after that. Of the group of mischief-makers, three of us became Sisters!”

From 1950-1963 she taught one of the first three grades at Wahoo, Assumption in Omaha and in Dodge, Nebraska, at Our Lady of Lourdes in Porcupine, South Dakota, and in Harlan, Iowa.

Sr. Joan’s most treasured experiences were her time abroad — First in Chile, South America, from 1963-1967 where she worked as a teacher, and in Honduras from 1994-2005 where she administered a sewing school and later a wood carving school.

“From our first mission in Chile we still have contact with the people we met more than 50 years ago,” Sr. Joan said. “We started a group of women to teach each other skills in cooking, embroidery, sewing etc. and I know that group is still going strong decades later. I also know women in Honduras have made better paying careers in sewing after learning at the school.”

In between her long periods of international mission work, Sr. Joan served people here in Omaha from 1969-1982 as a social worker, serving clients like young local mothers to the first Vietnamese refugee group to come to Nebraska. After that, she had complete responsibilities for the refugee program.

For the first few years of her working for the Nebraska Department of Social Services, none of her coworkers knew she was a nun. Sr. Joan remembers that her employers worried about people being aware of her religious status and asked not to tell anyone.

“I was going to interview a client and her friend was there who I knew from a previous Job Corps position I had. When she saw me in the waiting area she jumped up and at the top of her lungs said, “Sister Joan, what are you doing here?!” And that broke the news to everyone that I was a nun.,” Sr. Joan remembered fondly.

Through all of her travels and service, Sr. Joan wrote prayers and poems. You can read some of them here.

She has an active prayer ministry and can often be found sewing and embroidering. Recently she sewed dozens of dresses for girls in Honduras.